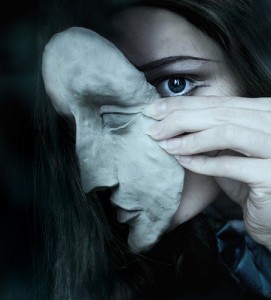 It's that time of year again - store fonts turn spooky, pumpkins become jack-o-lanterns, and people of all ages slip into disguise. It's thrilling to think that with a few smears of make-up and a clever costume, you can become whoever (or whatever) you want. You can even take on the identity of the very thing that scares you most: a vampire, an axe murderer, a ghost, or even a cackling clown. If you're really good, you can convince - or at least impress - the most scathing of skeptics.

Some of us live for the day we can shed our skin and become someone else for a change. For others, however, a disguised identity is the norm. I'm not talking about spies, undercover agents, or even full-time mascots - I'm talking about the anorexics and bulimics that walk and talk among us, often unseen or unrecognized, posing as normal, carefree members of the crowd. They could be teammates in your soccer league. They could be sitting next to you in class or on the bus. They could be your neighbours, co-workers, or friends. They could even be members of your family.

Anorexia and bulimia are diseases of shame and isolation. The person suffering with this disease does everything in secret. This is done out of a deeply rooted fear that, if anyone found them out, they might level the harshest of judgments. So they conceal their bizarre routines of life and let others see only normal, happy humans.

I wore the "I'm fine" mask for years, while in truth I was internally corroding. I put up what I thought was a convincing facade of vivacity and wit, while behind it I waged a war of self-destruction. Beneath layers of baggy clothes and a make-up force field, I was laid waste by the angry lies played incessantly in my head. It was like a Halloween costume turned inside out, with the skeleton on the inside beneath a normal human disguise. I really was the walking dead. Oddly enough, my “I’m Fine” mask was scarier than any of my other costumes over the years.

But thankfully, after my years of recovery, I’m no longer in hiding. I can be my true self again, no masks or disguises. I’m no longer a full-time ghost, skeleton, witch, or zombie. This Halloween, I can put on a scary costume just for fun and laugh, because the rest of the time I’m free and proud to be truly me.