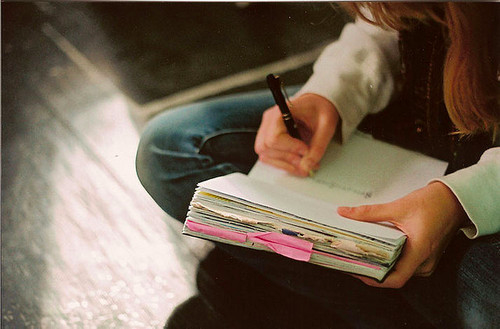 I know many anorexics, bulimics, and other disordered eaters who prefer to keep their experiences tightly under wraps - a book bound, locked, and hidden under the floorboards. And I can understand why - who wants to reopen old wounds or expose what might be perceived as weaknesses? But somehow, I’ve never really felt that way. For the most part, I’ve always been quite open about my life as an anorexic in recovery, from the moment I was first diagnosed. Why? Well, a few reasons come to mind…

First of all, it’s a conversation that doesn’t happen enough. Eating disorders have become increasingly prevalent among females and males over the past three decades, and yet only recently have we really been bringing the issue to light. Prior to the establishment of organizations like the Looking Glass, the National Eating Disorders Association, Jessie’s Hope, and many others, the topic of disordered eating was swept under the rug, stigmatized, 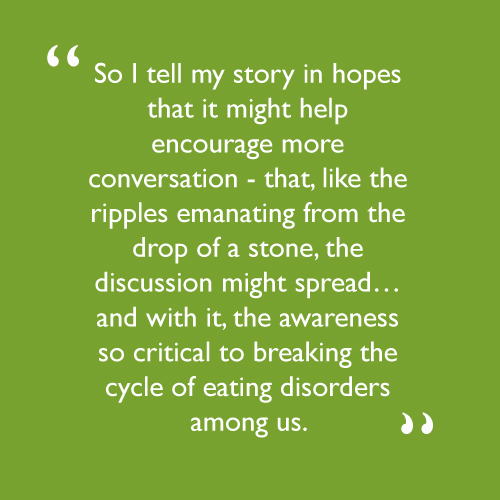 misunderstood, and even outright tabooed. But they existed nevertheless. In the shadows they proliferated until the sheer volume of emaciated or internally damaged patients could no longer be ignored. To this day, the world still struggles to accept anorexia, bulimia, and other eating disorders as true diseases.

So I tell my story in hopes that it might help encourage more conversation - that, like the ripples emanating from the drop of a stone, the discussion might spread… and with it, the awareness so critical to breaking the cycle of eating disorders among us.

The second reason is a bit of a selfish one: I share my story because there’s nothing that holds me to recovery better than reflecting on where I once was, what it was like, and how far I’ve come. The pain of a long, agonizing journey that at times just barely skirted death has left me with a few scars, but I’m grateful for the marks of life worth living. Most people might want to forget the torture of an eating disorder, but for me, it’s an unforgettable force that holds me to recovery. Hospital wards, IV’s, ceaseless fear, and a cold that reached far beyond the physical - there’s absolutely no way I would ever want to go back.

Finally, and most importantly, I tell my story in case there’s even the tiniest chance that it might be of help to others - that my experience might actually benefit those who still suffer. Because these are diseases of isolation that make the victim feel alone and unlovable, the hope that someone else can truly relate is perhaps one of the strongest assets in recovery. I made so very little progress in my own recovery until I found others like me who had found freedom from their eating disorders, and were willing to share their experience with me. So I tell my story as they did, to pay the gift of freedom forward. The truth is, no one can recover alone - and there’s no better guide for a journey than one who has traveled the path before.