Breaking Down the Myth of the Bikini Bod

Type in “summer” and “body” into Google and you get pages upon pages of workout and diet plans, usually accompanied by a picture of a shimmering female abdomen (face often not included) against a beach backdrop. As soon as the weather shows any indication of warming up, we are bombarded with messages about our bodies and their "imperfections" which, according to these articles and ads, get more glaring and unacceptable during the summer.

But let us call it what it is. Any magazine, program or product that advertises that it can help you “get your best beach body ever!!!” is not really there to help. It is there to body shame until consumers hate themselves enough to buy these products in the hope that this fitness class, bottled smoothie, or diet supplement will fix the lifetime of shame that has been instilled upon us.

As artist Caroline Caldwell said: "In a society that profits from your self-doubt, liking yourself is a rebellious act." This is that much truer at this time of year, when the "health" and diet industries' body-shaming is at its peak.

So, rather than immediately buying into this, let’s first take a moment to break down the concept of a “beach/bikini/summer body.”

The whole idea rests on the premise that our worth and the worth of our bodies are determined by how aesthetically pleasing they are to others—not even our partners or loved ones at that, but what complete strangers that we may never see again and that don’t know a thing about us think about our bodies. This, in turn, assumes that others actually care; in reality, most people don’t. Lastly, it implies that our bodies are never good enough to be seen by others, that we can always be skinnier or fitter. As people in recovery from eating disorders know, this is dangerous and disordered thinking, the kind that we have to work on for years to break out of in order to heal. The fact that this kind of thinking has been normalized in advertising shows how much more work we have to do. But as recent campaigns have shown, we are taking some big steps towards abolishing toxic body-shaming messages. 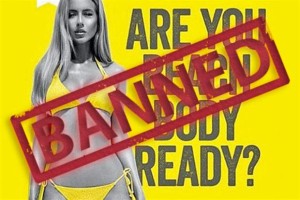 Even for the most confident among us, standing under fluorescent lights in a small mirrored dressing room is bound to spark at least a little self-scrutiny--especially after the lifetime of body-shaming and weight loss marketing we have all been subjected to. Which is why it's so refreshing to see so many women fighting back against these messages. Around this time last year, for example, Protein World released a bright yellow ad for its "weight loss collection" which featured a muscular woman standing against the backdrop of the words: "Are you beach body ready?" With 71,101 signatures on the Change.org petition and a social media backlash so strong that the ad got banned in the UK, the response was overwhelming and made the news worldwide. "Every body is beach ready," read one response. Another posted a satirical three steps to getting a beach body: 1) Locate your body, 2) Take it to the beach, 3) That's it.

Protein World's responses on Twitter were equally as insensitive and sexist as the initial ad. It was just one of the many triggering and body-shaming ad campaigns that have taken the "beach body" approach, but the solidarity of people banding against this message is the most inspiring thing to take from this situation. The fact that consumers (mainly women) are not accepting these messages, that they have platforms to share these ideas, and that there are enough people banding together against these messages to ban an ad like Protein World's in the UK, are all indicators that we are moving forward, even if they are tiny steps.

Ljudmila graduated from SFU, where she studied psychology and gender studies. She lives in Vancouver, BC and is doing her MA in counselling psychology, with the goal of doing women-centred therapy.