Strength Inside And Outside Of Recovery

Strength can mean a number of different things to a number of different people. Some may define it as being physically strong and being able to lift heavy things, while others may feel it more encompasses a mental quality, to be able to withstand any given scenario and emerge better from it. I think we can all agree that strength can encapsulate both physical and mental, and it isn't so black and white. Just like recovery. Recovery is an entirely different beast, with everyone having their own opinion on what it looks like.

I was thinking about what it mea 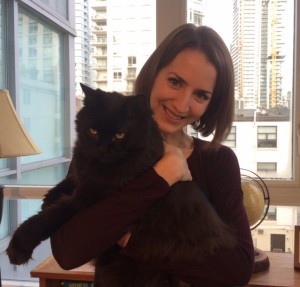 ns to be strong recently during a yoga class. In the past few years I've taken up yoga as part of a healthy lifestyle, and the thing I love the most about it is that it's truly a non-competitive and supportive environment. It lacks the ego of the competitive sports that I participated in growing up, and the obsessive nature that was apparent in the other active pursuits I took up while in my eating disorder. It genuinely fosters mindfulness, and is great to calm down the mind and slow your thoughts. Also, you don't need to be super flexible, and the practice works out any knots in your muscles naturally (hello good posture!). For someone that is recovered from an eating disorder, it really has been for me, a great choice for healthy activity. Anyway, I digress.

Back to strength, I have always thought of myself as being physically weak. It was regularly pointed out to me and evident that I lacked strength, and I could never open jars or lift anything remotely heavy. While this was obviously an effect of my eating disorder, this perceived physical weakness persisted even before I was ill and now through recovery. So when I practice yoga, I have a complex in my head that I am limited to the postures I can do. I can never do inversions (headstands, handstands, etc) or arm balances (being crow, side crow, and all that jazz). Try as I might, I could never get into them. I even recently took an inversion workshop hoping to master these poses. I was practicing regularly at home and falling on my face more often than I'd like to admit. I may have bruised my hand in a particularly embarrassing public incident in class.

While I have made tremendous improvements in the past few months towards these positions and have slowly built more physical strength, I always get terrified once I begin to go upside down. Back to that recent yoga class, I was feeling a bit defeated since I had tried! So hard! Yet no cigar. I thought to myself, why is it so important to me? Nobody thinks any more or less of me if I can't do these poses other than myself. Nobody hands out a gold star for being able to do a headstand, that isn't the point of yoga.

I realized it was because I wanted to change my own perspective of being strong. My reasoning wasn't to prove it to anyone else; it was really just for me. As I mentioned earlier, it was always commonly said I was not strong, and I had convinced myself of the same thing. I think I wanted to prove to myself that YES, I can do it. I can be strong and confident. That if I set my mind to something, I can knock it out of the park.

But really, it ties strongly into mental strength too. As I dug deeper, I recognized that this was definitely not something I was able to do during my eating disorder. During my struggle with anorexia, while I did have an exercise obsession, I couldn't even think of mastering a headstand; I would have crumbled into a pile. I realized that my desire to master these poses was more representative of how far I've come since those days, and I wanted to prove to myself as some sort of benchmark of my progress in recovery.

This was important to realize, because it also made me think: do I need to be able to go into and seamlessly hold crow pose to prove that I'm recovered? No! It's nice to be able to do and looks cool and everything, but I think the very fact I'm alive and having an active, fulfilling life that includes yoga is enough for me. That's how I measure recovery, and more importantly, strength. And not just physical strength; mental strength, and what that means to me. It's important to ask yourself what exactly recovery means to you, and what kind of person do you want to be.

Funnily enough, once I had this conversation with myself, at my next yoga class I nailed crow pose. Maybe that shows that once we stop worrying suddenly everything becomes easier? Who knows, that could be another topic altogether. All I know is everyone is strong in their own ways, and I truly believe that those who suffer from and recover from eating disorders are the strongest people I know. We all need to channel our inner strength and foster others.

Carolyn went to the University of Victoria for psychology, and is currently working towards applying for a Master's degree in the same subject. She hopes to uncover what sociological and personality aspects contribute to the development of eating disorders. Otherwise, Carolyn loves writing, drawing, travelling the world, and of course, her handsome cat.