The Age of the Body-Snitchers

I really didn't want to talk about this today.

In fact, most days I don't want to talk about this. I'm tired, frustrated, and quite frankly, bored talking about this. But this is a conversation that really needs to happen – because we live in a culture that perpetually shames, abuses, and harasses the bodies that inhabit it. And I can't afford to be sick and tired of talking about it, because the stakes are too high and we still have a lot of work to do together. 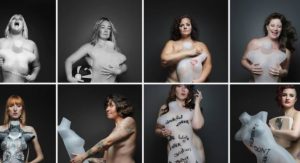 This is what I'm going on about: A Canadian photographer named Julia Busato created a series of portraits featuring naked human beings posing behind a mannequin torso. The series challenges prototypical standards for beauty & body size, and subverts the destructive idea that 'one size fits all.' The full photo series is available on Busato's website, which is aptly titled Seeing Beauty in all Things, but the platform where she was gaining the most new views, shares, and feedback was -naturally- Facebook. Despite the fact that Busato's carefully curated Facebook gallery didn't contain a single ounce of nudity, some users flagged the images as “inappropriate,” and Facebook in its wisdom saw fit to remove several of the images and slap Busato with a temporary ban from accessing the site.

Where, oh where, to begin with this one? The selective image removals, and whatever standard was used to deem only some of the bodies reprehensible while others were acceptable. The people who think they have the right to label another's body as unfit for social media consumption. The banning of an artist from using a website whose members wilfully exploit, harass, and humiliate each other in the name of free speech. The courage and vulnerability of the models to put themselves out there, only to be snarled in a trap of online human insecurities. Or, as my colleague Nicole pointed out, the absurd double-standard that enables celebrities like the Kardashians to post nude and semi-nude selfies, while allowing an angry, offended mob to decry a photographer's Art as something crude and profane.

The problem, of course, isn't the Kardashians and their ilk. It's the archaic, grotesque idea that any one of us has the right to literally snitch on another person's body because it doesn't look enough like a mannequin. Busato's series hosts a diverse range of bodies that vary in size, shape, skin colour, gender, and body art. The whole thing is celebratory, inclusive, and positive – unless, of course, you're offended by bodies that, to quote the artist herself, “don't fit in the mold.” Then it's a whole can of writhing, naked worms verging on the pornographic.

When we visit art galleries, museums, or the many plazas and places of worship worldwide that house ancient works displaying naked gods and mortals, do we rage and protest? I really hope not. Such works are often on view in some of the most sacred spaces we know. Churches, temples, monasteries, mosques, tombs – all of these spaces are associated with traditions whereby the nude human body in many different forms is considered worthy of our admiration, our respect, and our acceptance. How can something so sacred be manipulated into something so profane? Can Facebook and its subculture of malignantly ignorant users even recognize, let alone reconcile, the difference between these two concepts? Neither of these questions are rhetorical, yet I feel like I'm shouting them into a void.

I'm sure it comes as no surprise to many of us that the majority of the negative comments on Busato's Facebook page focus on the bigger bodies in the photo series. Acknowledge that bodies come in more than a few sizes, and cue the horde of vitriolic body-shaming sentiment unconvincingly disguised as mere concern for public health – as though a plastic, mannequin-based body ideal is somehow synonymous with health. But then there's shaming of the smaller bodies, too, because of the misguided claim that you need X many curves to ride the body-positive train. No matter how we try, as soon as we step forward to celebrate confidence and self-acceptance, others are there to demoralize, crying out that we have no right to love ourselves.

No matter how we try, as soon as we step forward to celebrate confidence and self-acceptance, others are there to demoralize, crying out that we have no right to love ourselves.

Enough is enough. Bodies are bodies. Shaming is shaming. We can't lock arms in our march for a post-recovery world if we're making up rules for exclusion. It is a fundamental truth that eating disorders, body dysmorphia, and body image issues are about so much more than food or exercise – they are about pain. It is unacceptable that Facebook, as an influential microcosm of our society, feels entitled to disregard that pain, and to dismiss a photo series that aims to help others overcome their own struggles, just to appease a subset of the population that wretchedly clings to the notion that bodies are for objectification only.

We need to re-personify our bodies. To reclaim them, unite them with our innermost expressions of beauty, and share them with the world according to our own authentic choices. No body is anathema, and each of us deserves to occupy our own body as a sacred space – free from the profanity of a body-snitching comments section.

To this end, what can we do as social media consumers and influencers to reshape this idea that our bodies are open to unwarranted scrutiny and discrimination? How can we legitimize our right to occupy space in the physical and digital world? We have a responsibility to ourselves and to our fellow human beings to raise the standard of acceptance instead of intolerance.

Kat recently graduated from Simon Fraser University with a degree in Psychology, and is thrilled to have joined the Looking Glass Foundation staff. She loves live music, theatre, writing, and singing when no one is listening.