Eating Disorders Are So Much More Than Media Influence

The prevalence of eating disorders, particularly among girls and young women, is often blamed on the media, on stick thin supermodels and actresses, on the countless magazine covers flaunting “best and worst” bodies, on societal pressure to be a size zero. In recent years, there has been a call to ban “dangerously skinny” models from the catwalk as a way of mitigating unhealthy body image in girls and women. “It’s very easy to say that a skinny model is responsible for encouraging young women to feel bad about themselves, but I absolutely strongly believe that is not the case,” responded Alexandra Shulman, the editor-in-chief of British Vogue. Eating disorders are often about body image, yes, but the reality is that the all-consuming nature of eating disorders is truly so much more complex than that. 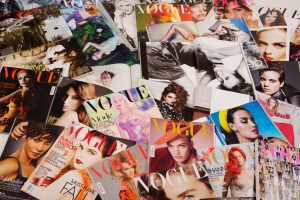 , argues that our society holds unrealistic, unattainable beauty standards for women as a way of oppression. Today’s omnipresence of media images is linked to the increases in plastic surgery, extreme dieting, and anorexia nervosa. While there is certainly some truth in these pressures and their inescapable nature, this is a dangerously simplistic view of the root causes of eating disorders. To begin with, it really only focuses on anorexia and disregards other equally serious types of disordered eating in which individuals are not necessarily visibly underweight. This is unfortunately a very common and harmful attitude that is responsible for an unacceptable number of people not receiving the help that they need. Furthermore, there is often a problematic view that a “healthy” weight indicates overall health, when the reality is that health exists at different sizes. Even for those in recovery from anorexia, the “refeeding” (that is, weight gain) part of recovery is not even close to the whole journey. Disregarding the deeper root causes impedes upon a sustainable recovery.

Eating disorders are often about body image, yes, but the reality is that the all-consuming nature of eating disorders is truly so much more complex than that.

We are only now just beginning to extensively research anorexia and bulimia; there is comparatively very little research and awareness about other forms of disordered eating, such as binge eating disorder, OSFED (Other Specified Feeding or Eating Disorder), and orthorexia. Perhaps it is not the prevalence of eating disorders that has increased, but our understanding of them and our increased acknowledgment of them.

In her stunning book, Hunger, Roxane Gay writes about a sexual trauma and the link to her relationship with food and her body.  “I do not know why I turned to food,” she writes. “Or I do. I was lonely and scared and food offered an immediate satisfaction. Food offered comfort when I needed to be comforted...Food was the one thing within my reach.” She writes of her trauma, of gaining more and more weight to make her body “safe” after experiencing a gang rape. Gay perfectly illustrates the role of food and of the embodiment of trauma, no matter how the unhealthy relationship with food may manifest.

"I was lonely and scared and food offered an immediate satisfaction. Food offered comfort when I needed to be comforted…Food was the one thing within my reach.”

Inversely, it is not uncommon for restriction to arise as a coping mechanism in times of chaos or following a deeply traumatic event. In the former case, many individuals report feeling that their food intake was the only thing they could control in their lives at times when everything else seemed to be spinning out of their control. The latter case is especially true for girls and women experiencing sexual trauma. It is not uncommon to use starvation as a way of “disappearing,” of making their body “less,” of reverting it to a time before the traumatic event. “The anoretic operates under the astounding illusion that she can escape the flesh, and, by association, the realm of emotions,” writes Marya Hornbacher in her memoir Wasted.  “I was an anoretic because I was afraid of being human. Implicit in human contact is the exposure of the self, the interaction of the selves. The self I'd had, once upon a time, was too much. Now there was no self at all. I was a blank.”

There is no one cause of eating disorders. It is not one image or one comment. Eating disorders are complex and so deeply personal that they are isolating. This is not to say that the media and its messages do not affect the people consuming them, nor that these images do not push some people to eating disorders. But eating disorders stem from this and so much more, and to assume that this is the only (or even the main) reason for eating disorders disregards the complex link they hold to trauma and emotional factors. Ultimately, all of these factors cannot be separated from one another to find one true culprit. As Hornbacher so eloquently summarized it: “I cannot help but think that, had I lived in a culture where “thinness” was not regarded as a strange state of grace, I might have sought out another means of attaining that grace.”

Ljudmila graduated from SFU, where she studied psychology and gender studies. She lives in Vancouver, BC and is pursuing a career in counselling, with the goal of doing women-centred therapy.