Reflections On My First Bra and Body Image

I was always a bit of a late bloomer. I got my period when I was fourteen. I had my first kiss at eighteen. When I was 12, I remember my mom holding back laughter when she bought me my first bra – a double A. It wasn’t just any AA, as most were too large. My mother, who despite my protests insisted in partaking in this mortifying experience with me, liberally and loudly explained the situation to The Gap’s finest Sales Associate. While I fought the idea of diving into a pile of clothes and disappearing, the sales associate directed my mom and me to the bras that generally fit smaller. I still had to stuff it for a while. 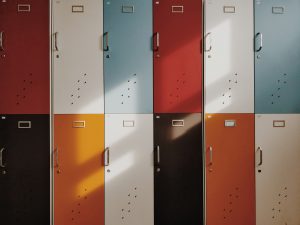 I remember being equally terrified that someone at school might find out that I folded toilet paper inside my new beige lingerie every morning and elated that I could finally be considered a woman. In my tween brain, this was the only milestone I could force, the only propellant into what I thought adulthood consisted of that I could control. I couldn’t force my period into existence, but dammit, I could wear a bra. And hopefully the “when are you going to get your period?” and “are you finally a woman yet?” questions and giggles at my child body from people with only slightly less childlike bodies would cease. No longer would I be the only girl in my group of friends whose bra was not snapped doing laps in gym class. No longer would I be the only girl whose breasts had no safety against the inevitable, protested, always unasked-for groping by the boys at school.

To be clear, I did not want boys to snap my bra in gym class, but I was ostracised because I didn’t have a bra to snap. And if a boy snapped your bra as you ran past him in gym class, it meant he liked you. And having a boy like you was a sure-fire way to get people to talk to you, perhaps even look up to you. Each time my bra was snapped, I guess I thought the Popularity Gods put one more notch on my popularity belt. I wanted to be popular. I also made it very clear that I did not want to be groped by them, but it happened with or without a bra, and especially with the added layer of toilet paper between me and their hands, with a bra was safer – their sweaty, adolescent fingers further away.

I mention these snippets of memories, delicately folded into my subconscious like toilet paper in a twelve-year-old’s bra, because these formative years describe my first experiences of hating my body. More than that, these are some of the first experiences I had in becoming aware of my body – the length of my arms, the size of my thighs, the colour of my skin (ivory, as my first foundation informed me) – and that how “society” thinks you look in your body could determine your value. I became thoroughly acquainted with the idea that a girl’s body is different than a boy’s in all the ways that Sex-Ed failed to mention. When the boys in class asked me to put my legs together to see if I had a thigh gap, I learned that a girl’s body must always be ready for scrutiny. When they determined that there was a barely acceptable space between my thighs, I was relieved in spite of myself. 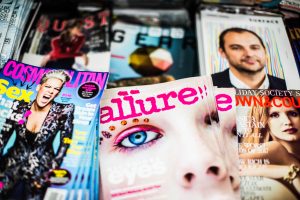 These early years shaped my relationship with my body. It wasn’t only these experiences. It was also my internalization of the metrics that magazines and casting directors used for measuring a woman’s ability, skill and importance. It was my friend drinking only V8 at lunch to lose weight in fifth grade. It was photoshopped pictures of already gorgeous women. It was my mom calling me beautiful and my friends complimenting my blue eyeshadow. It has taken me a long time to realize how this obsessive emphasis on appearance affected my body image -- and how my poor body image was the crevice in my psyche that allowed my eating disorder to develop.

I recognize that these memories don’t hold a candle to the stories of far too many other women. The bullying I encountered felt almost good-natured compared to the bullying that those same people inflicted on others in my class. The sexual assault I experienced was a mere inappropriate groping, touching, kissing. Yet it was enough to destroy my self-worth and body image. It was enough to directly or indirectly contribute to the eating disorder I’ve lived inside for six years. I will not minimize my experience because it is a common and normalized one or because others experience much worse. All of it is wrong. All of it perpetuates diet and rape culture (which prop each other up, arms of the same beast). So, all of it must be brought to light.

After being sexualized, groped and teased about my body throughout elementary school, I sort of dissociated from it. My body no longer felt like home. I felt like a foreigner in it, the script on my rib cage in a different language. After my child body eventually died and I started growing into a woman’s body, I did so truly and completely. I discovered all the ways a girl could wish to not exist, or at least wish her stomach didn’t. I was no longer the thin, cute, small, petite girl for whom my mom bought a first bra. I grew. My face changed, my stomach rounded and, I should note, that my breasts grew to a sizable I-is-for-irony. Yes. I. A, B, C, D, E, F, G, H, double I. A few years earlier, I was made fun of for “being flat”. Suddenly, it felt like a silence surrounded my body, like I was the elephant in the room (Puberty, man. What a ride.). This body wasn’t mine. I denied the reality of it; ignored my stomach, ignored my breasts, ignored seeing the letter “L” instead of “S” on clothes tags. This wasn’t my body. I was just growing, I thought. Soon, I’d finish growing and be small again. My mom told me you grow out before you grow up. I was just growing out and soon I’d grow taller and be small again. 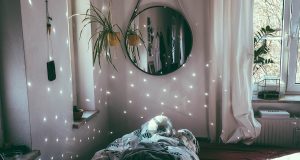 I am a socialized product of my culture and I was obsessed with becoming thin and small, but I do remember a time before all of this in which my body was just the thing that got me from place to place. My body was not something to be remarked upon, it just was. There was no moralization of my body parts or of food. I never even thought about it. I remember being confused when friends recycled conversations about their distaste for their own body: how they hated their big thighs or never looked down because they thought they had a double chin. I remember being genuinely confused by their obsessive remarks about their bodies. I was immersed in diet culture, fat-phobia, and body-shaming practices long before I understood them. I was body neutral. I had a body that could do all the things I needed it to do. I had greasy hair that people mistakenly thought was great conditioner and I had lanky, uncoordinated limbs and two eyes, a nose, ten fingers. There were no moral implications to be made about my size or shape. I didn’t celebrate it, I just lived in it. Even as a child, I had more important things to worry about.

These days, I strive to simply live in my body. These days, I have more important things to worry about. And it’s a damn good feeling.

I think about that child now and again. That space between my obsession with thinness and my confusion regarding others’ obsession with thinness allowed me to understand that there is another way to perceive the world. There is another way to live inside your body. Much like learning to eat intuitively and to destroy all the food moralizations I’ve built over the years, I’ve been learning to come back inside an intuitive relationship with my body and to destroy the body moralizations I’ve built over the years. I think these practices go hand in hand. When you think about how your body feels when eating a certain food, you must be inside your body to feel it. This is what I strive for these days. It’s a process. There are days when I hate my body like I once did and there are days where I dance naked in front of my mirror and smile at what jiggles. It is unrealistic to think I’ll ever be naïve to the culture I’m immersed in, which is fine. I should be all too aware. However, in writing this story I now remember a way of life that combats diet culture. My younger, body-neutral self can act as my mascot for the intuitive relationship with my body and food that I know I am capable of. These days, I strive to simply live in my body. These days, I have more important things to worry about. And it’s a damn good feeling. 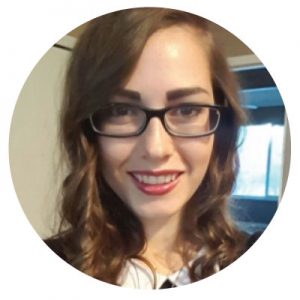 Emily is a proud blog contributor for the LGF, an inevitably struggling student, an efficient consumer of Netflix content, a coffee addict and pursuer of ED recovery. She is also participating in many programs that LGF has to offer.