Healing The Moments In Between

By Sabrina Banadyga, Head of Marketing at Sympli

“If I could have one wish granted, my sweet Malia,
it would be that you feel comfortable in your own skin.

I’m beyond grateful to be in this place in my life, able to look back at how far I’ve travelled on the dirt road to recovery from anorexia with a sense of pride, gratitude and resilience. Resilience is a muscle after-all, and at this point I’m feeling pretty ripped.

Healing happened in experiences that no doctor prescribed for me. Of course, I did the standard western medicine approach with a cadence of doctor visits, eating disorder therapy and nutrition support, and they played an important role in my recovery.  However, for me the most transformational healing happened during the in between moments over the last couple of decades.

My therapist called me saying that her nanny was sick, and she would need to bring her baby with her to the appointment, she was happy to reschedule, or we could wing it and see how it went. I sat across from her as I usually did every week, trying to get to the heart of what was causing my anorexia, this time was different though. A cooing and fussing baby was in the room, at first an annoyance and trigger as I was told by medical professionals that I had a slim chance of ever having children. It was a reminder of another thing I couldn’t have, another reason to punish myself and my body. As I was telling my therapist about my latest strategy to measure my weight loss as I didn’t trust the mirror, scale or my draping clothing, she lifted her fussing baby to her breast to feed her. I was speechless. The ultimate in giving and receiving pure sustenance. No issue, primal.

Could nourishing myself be that simple? It once was, and I wanted that simplicity again.

In Between Moment – Disappearing Act.

“What are you trying to do, disappear?” said my father when I finally had the courage to come forward to him about my eating disorder, asking for help. Well yes, actually. I couldn’t have put it better myself.

It’s been a process of unravelling generational belief systems in my family.  Those of perfectionism, not being enough, scarcity. I’ve since found reverence for those that have come before me that didn’t have the resources, community, and encouragement to be honest and vulnerable about their experiences.  I’ve continued to choose the path of vulnerability and openness about my experiences, it’s been transformational and healing. Rarely easy but each time I feel a lightness, shedding another layer in the process to recovery. Constantly moving from shame to vulnerability and courage might take a lifetime and I’m ok with that as long as I can continue to feel one moment further ahead than the last.

In Between Moment – A mother to Malia.

Crossing the threshold to motherhood was an unexpected wave, maybe more like a riptide. As I was told I would have a slim chance of having a child I lived my life accordingly. Career. Travel. Love. Adventure. I relapsed into a form of anorexia more times than I could count from each move, failure, broken bone, broken heart. I relapsed because it was a place I could call home amidst the turmoil of life. Then resilience, faith, and love would kick in and once again I would be one moment further ahead on my journey.

Then one day in 2015 I said yes to becoming a mother, little did I know what a healing journey it would be.  I was terrified that my past with anorexia would trigger a relapse as I watched my body grow and change and expand. Instead what I felt was a different purpose, a responsibility to feed this inner child in spite of my struggle to feed my own. I gained weight and loved my bump and curves and their purpose for being there. A level of body acceptance and reverence for the profound capability of my body settled in, one that I had never experienced before.

Breastfeeding her became a reminder of the primal simplicity of eating. Hunger. Feed. Repeat. I am conscious of the energy of food and the process of eating, ensuring that Malia listens to her body. Now that she is at the fierce age of 4 (and me, fiercely 40ish) I strive to teach her (and myself) the importance of listening to the body.

Quiet. Are you hungry? Are you full? What does your body tell you? Let’s listen.

Motherhood. Career. Travel. Love. Adventure. It just looks different now, a different body, one that is stronger and more capable than I gave it credit for. One that created a beautiful little girl and continues to have the resilience and courage to show up to (almost) every moment with her. And for those moments that I don’t show up as intended, I have so much more compassion, love and forgiveness for myself than I knew was possible.

With gratitude to the community of friends and family that continue to lift me up to reach new heights each time I fall. And to Sympli for employing me to be a part of a clothing line promoting body positivity where comfort equals confidence in your skin and your clothes. Sympli is about being free to explore a life you’ve created, to reinvent the rules to suit your personality, this I can really get behind.

A heartfelt thank you to Sabrina for sharing her story and to the wonderful team at Sympli – for giving so much, and in so many ways. 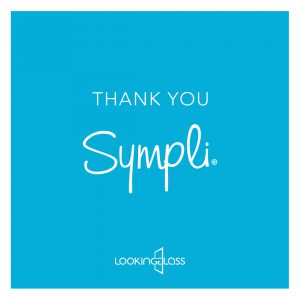 Sympli is a Canadian fashion manufacturer that feels we should all be accountable for holding women’s body image with kindness and respect. Sympli believes that everyone should be aware of their power to create an impact, and this shared belief is what brought Sympli and the Looking Glass Foundation together. Believing that "all women should love who they are without compromise", Sympli manufacturers an extensive line of flattering clothing that is is designed with purpose, and crafted with heart. They want women to wear clothes as a compliment to their individual personality, mood and purpose – and to dispel the myth that they would be happier with a 'perfect body'. Not only are they redefining how the fashion industry can make women feel good about themselves ... they are also showing women how to take back their power and create positive change. May the movement grow and flourish!