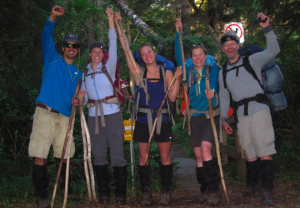 Scott, his daughter, and their friends on the West Coast Trail last summer

I am the proud father of three wonderful, young women between the ages of 19 and 24 years old. Raising three daughters has been both rewarding and challenging. You do your best as a parent to learn and prepare yourself to help them through the world. But what I found out a few years ago was that I was not prepared, nor equipped, to deal with the additional challenges that presented themselves when I discovered one of my daughters suffered from an eating disorder.

I believed one of the most important responsibilities I had as her father was to keep her safe and secure. Had I failed her? How could this be possible? I didn’t recognize the signs; or perhaps, I chose not to recognize the signs.

She was an extraordinary over-achiever with an outgoing personality, who appeared to everyone to be a very self-confident young woman. An accomplished pianist, ballet dancer, skier and student at the top of her class, who regularly brought home top academic honours. She had a very good group of friends, yet she often chose to spend time alone.  She began to spend much more of her time alone in her room. She read. She exercised. She researched topics of interest, extensively. She slept for long periods and often at odd times of the day.

What I did not understand at the time was that these are common characteristics of children and young adults suffering from eating disorders. So many of the behaviours I admired in her were essentially contributing to her illness.

This was just the beginning.

I understood the depression first, which led to the many visits with counselors. Once aware of her depression, it seemed other symptoms and events presented themselves quite quickly. Manic behavioural swings, obsessive compulsive behaviour like running constantly, or reading books from cover to cover before she would emerge from her room.  These occurred well in advance of any ‘body image’ or ‘food’ related concerns that I was aware of, but they quickly followed with an extremely low heart rate, severe mineral deficiencies, “brain fog,” or “Organic Brain Dysfunction,” and thoughts of suicide. Moreover, the personality that previously defined her was gone. A protective shell had replaced the goofy, fun-loving and confident young woman. Her interactions with our family and even our dog had changed.

These more dramatic symptoms demanded that I take action if I wanted to save my daughter.  I knew she was very ill but, like her, I also felt helpless.  I did not know anything about this disease. My wife and I began to research eating disorders to learn how “I could fix it.” I didn’t understand at the time that “I” could not “fix it.”  As I researched, I became increasingly distressed with the lack of available resources for those that suffer from an eating disorder, including their families and friends.  It appeared that many of the physicians, health care providers, and counselors to whom I was reaching out were less aware of the disease than I was.

My daughter was half way across the country at university when one of her roommates finally intervened and it became apparent to me that she needed to come home. I flew to Toronto and fortunately, she was prepared to acknowledge she had a problem and agreed to withdraw mid-semester from her program and come back to Vancouver.

I don’t think I have ever been so afraid.

My research was now more earnest than before. Hours upon hours were spent researching where and how to help my daughter.  I felt even more helpless, which is when my wife discovered a small website, which surprisingly, we had not yet seen. That day, the Looking Glass Residence -- at that time, called the Woodstone Residence -- came into our consciousness.

The period prior to her admittance seemed like an eternity. My family was anxious yet hopeful, and my daughter also went through an entire range of emotions: from excitement about her own future to fear and trepidation.

Looking Glass Residence was a haven for her. She welcomed learning about her eating disorder and the friendships came naturally in this community that had so much in common. While she was at the Looking Glass Residence I saw the return of my daughter. It was not immediate, but over this three month period with my periodic visits or phone calls, I heard “her” voice again. There was hope in her voice and a joy I hadn’t heard in well over a year.

She now has a path to her future and I have my daughter back.

Scott is a Member of The Looking Glass Foundation’s Board of Directors and a valued member of our community. He and his daughter will courageously share their story at our annual Gala in March 2015.