Eating disorders are complex mental illnesses that can be life-threatening. The stigma around eating disorders, as well as the normalization of certain disordered beliefs and behaviours around food, weight and exercise in our culture, contributes to a lack of understanding and awareness. This can act as a barrier to care for people who desperately need and deserve support. Understanding the nuances of this disease is an important step in ensuring no-one has to suffer in silence. 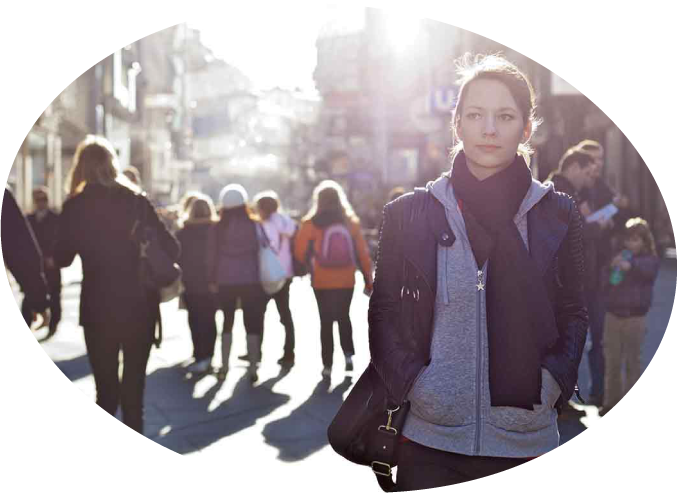 What Is An Eating Disorder?

An eating disorder is a condition characterized by severe behaviors, attitudes, and painful emotions around eating, food and body weight or shape. The eating disorder may be used as a way to cope with difficult situations or feelings, often to help the individual feel more in control. Behaviours can include limiting the amount of food eaten, eating very large quantities of food all at once, compensating through unhealthy means such as purging, fasting or excessive exercise, or a combination of these behaviours. Every case is different.

Eating disorders have both psychological and physical implications. They affect every organ system in the body and bring increased risk for cardiac arrest, stroke, and other hormonal and neurological issues. They severely impact a person’s social, emotional and spiritual wellness, hindering their ability to feel fulfilled, present and happy.

Anorexia nervosa is characterised by persistent behaviours that interfere with maintaining an adequate weight for health, or a lack of appropriate weight gain in children and adolescents. Anorexia typically entails an intense fear of gaining weight or becoming fat, a distorted sense of one's own body weight or shape, and denial as to the seriousness of being underweight. Anorexia can but does not always include binge/purge behaviours.
Atypical anorexia shares the same characteristics as anorexia nervosa; however, the person’s weight is within or above the “average” range for age and height.

Bulimia nervosa is characterised by periods of food restriction followed by binge eating, with recurrent compensating behaviours to “purge” the body of the food, such as self-induced vomiting, misuse of laxatives, diuretics, enemas, diet pills, fasting, or excessive exercise. Bulimia has many of the same characteristics of anorexia, including a distorted view of one's body shape and weight.
Bulimia is seen as a disorder when the restricting, bingeing, and purging cycle occurs at least once a week for three months or more. A binge eating episode is characterized by:
The consumption of an unusually large amount of food within a relatively short period of time.
Afterwards feeling out of control over what and how much is eaten. Individuals often experience shame or embarrassment and may go to extreme lengths to hide these behaviours.

Binge eating disorder is characterized by recurrent episodes of eating large quantities of food then experiencing shame, distress or guilt afterwards. It is important to note that overeating and binge eating are not the same. Overeating can be described as consuming more food than your body needs at a given time. Most people overeat on occasion. Binge eating is less common and is marked by psychological distress. A binge eating episode also includes three or more of the following:
Eating very quickly
Eating regardless of hunger cues, even if one is already full
Eating until uncomfortably or painfully full
Eating alone due to embarrassment about the type and quantity of food ingested
Feelings of self-disgust, guilt, and depression
Binge eating is seen as a disorder when the bingeing episodes occur at least once a week for three months or more. The binge eating episodes are not followed by compensating behaviours as in bulimia nervosa.

ARFID involves limitations in the amount and/or types of food consumed, but unlike anorexia, it does not involve any distress about body shape or size, or fears of weight gain. Symptoms of this eating disorder typically show up in infancy or childhood. A child may avoid foods with certain textures or colours, or a traumatic experience involving food, such as becoming physically ill after food consumption, may result in a fear of eating. ARFID can severely compromise growth, development, and health since the body’s requirements for nutrition and energy are consistently not being met.

Unspecified feeding or eating disorders cause clinically significant distress or impairment and do not match the criteria for any of the specified eating disorders. Examples include:
Pica: this disorder is characterized by the persistent consumption of non-food items. As a normal part of learning and development, children between 18 months and two years of age may eat non-food substances. If this behaviour occurs later in life, it should be addressed as quickly as possible. Non-food substances may include paper, soap, cloth, hair, string, wool, soil, chalk, paint, metal, pebbles, ash, or clay.
Rumination Disorder: rumination refers to consistent regurgitation of chewed and/or partially digested food. Previously swallowed food is brought up into the mouth effortlessly, with no sign of gagging or nausea. Similar behaviours can be observed in infants. If children do not outgrow this behaviour, it should be addressed. Rumination can also be a symptom of anorexia or bulimia.

Orthorexia refers to an obsession with “healthy” or “clean” eating. The definition of "healthy” food can vary depending on the person. Individuals may obsess about the benefits of healthy foods, but not necessarily the quantity of food. Someone engaging in these eating behaviours might feel extremely anxious or guilty if they eat food they deem “unhealthy”. Orthorexia can have implications on physical health due to a lack of adequate nutrients or food groups.
Orthorexia is not formally recognized in the Diagnostic and Statistical Manual as a diagnosable eating disorder.

What Causes an Eating Disorder?

There is no one factor alone that causes an eating disorder. Rather, there are contributing factors — biological, genetic, psychological and sociocultural — which, combined, may increase a person’s likelihood for developing an eating disorder. There is ongoing research to understand the role biology and genetics play in the development of this illness. Psychological risk factors include low self-esteem, feelings of inadequacy or lack of control, history of trauma, and stress. Many people who struggle with eating disorders have a co-occurring condition, such as anxiety, depression, self-harm, substance use, PTSD or obsessive-compulsive disorder.

The sociocultural environment in which a person lives can also play a role. Cultural norms place unrealistic and harmful expectations on people to achieve "thinness” or muscularity, or to look a particular way based on narrow gender norms or Western beauty ideals. Over-exercising and certain bingeing behaviours have become normalized in our society. Weight shaming, fatphobia and bullying can also contribute to the development of eating disorders.

Family influences can include family attitudes toward eating and weight, difficulty communicating or resolving conflict, neglect, and history of mental illness, among others. Family and caregivers do not cause eating disorders, but they do play an important role in the care and support of someone who is struggling.

Learn More About Supporting Someone With An Eating Disorder

Who Do Eating Disorders Affect?

Anyone can develop an eating disorder. Although they have been associated with young, white, cisgender, heterosexual females, in actual fact eating disorders affect people from all demographics. Misconceptions about who is affected by eating disorders can be harmful and impact the diagnoses, support options and access to treatment for those who don’t fit the stereotype. Informed, culturally appropriate care is essential in order to facilitate recovery for people of all lived experiences.

Children, adolescents and athletes are particularly vulnerable. The following groups are also worth noting due to the increased risk and/or distinct barriers to care which they face:

2SLGBTQ+ individuals face unique experiences and stressors that result in a higher probability of developing an eating disorder. These can include but are not limited to discrimination, bullying, trauma, lack of support from friends and family, and pressure to look a certain way in order to align their body with their gender identity. 2SLGBTQ+ folks may face barriers to care due to harmful stereotypes, negative experiences or feeling unsafe in healthcare settings, as well as a lack of affirming treatment options.
Check out NEDIC’s resource on eating disorders in the 2SLGBTQ+ community

Despite the dominant narrative of who typically suffers from an eating disorder, it’s important to note that people who identify as men are also affected and may face barriers in seeking support due to harmful stereotypes around gender and mental health, and the misconception of eating disorders as a “female illness”. In males, eating disorders may present as dissatisfaction with their bodies due to lack of muscle definition, an obsession with fitness and excessive exercise, rigid behaviours and beliefs around food, heightened anxiety or irritability around mealtimes, low self-esteem and distorted body image.
Read our Blog: “A Man’s Perspective”

Eating disorders can develop as a way of coping with trauma or difficult situations in a person’s life. Marginalized communities typically face higher levels of discrimination, poverty and food insecurity which can seriously impact mental health. The pressure to conform to Western values around weight and appearance may also play a role in the development of body dissatisfaction and disordered eating.

Diabetes is a risk factor for developing an eating disorder due to the intense focus on monitoring food, labels, weight, and glucose levels. Type 1 diabetes with disordered eating (T1DE) or “diabulimia” is an eating disorder that only affects people with type 1 diabetes. It occurs when a person purposefully restricts insulin in order to lose weight. Other medical risk factors include the management of hypoglycaemia (or low blood sugar level), starvation, and other purging behaviours.