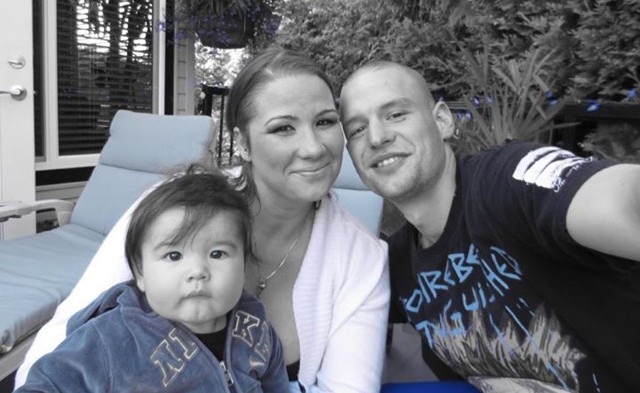 Several years ago, Tyson Busby was the first young man to enter treatment at the Woodstone Residence on Galiano Island (now the Looking Glass Residence in Vancouver). Recently, we asked Tyson to reflect back on his experience, and to give us a man's perspective on eating disorder recovery...

Several years ago, Tyson Busby was the first young man to enter treatment at the Woodstone Residence on Galiano Island (now the Looking Glass Residence in Vancouver). Recently, we asked Tyson to reflect back on his experience, and to give us a man's perspective on eating disorder recovery.

LGF: You had a lot of tough experiences as a kid. Do you think the need to control or manage those emotions somehow led to the development of an eating disorder — or was it something else? I didn’t know how to properly control my emotions when I was younger and I hid them deep down inside without letting them go or talking about them. I let my emotions eat me up inside, which was a big reason my eating disorder developed. If I'd known how to deal with my emotions mentally, and had been able to express them, I don’t think I would have gone down the eating disorder path. Being able to express yourself and not hide your true feelings is a big accomplishment and a huge step towards having a successful life.

Do you remember when you first started using food to deal with the issues in your life? What was it about food and eating that made you turn to it? I think I started turning towards food around the age of 12. It was a way for me to cope with my depression. I was active as a teenager but I’d always end up binge eating at home when I didn’t feel good about myself. I don’t how or where my attachment to food started. Looking back now, I know that bingeing damaged me in many ways — but at the time it was about trying to make myself feel better.

What was it about your experiences with food and eating and weight that might have been different for you because you were a boy? There’s always pressure. It doesn’t matter if you’re a boy or a girl, simply going to school has its own pressures. Everybody wants to fit in somewhere. We’re all trying to change to fit in better, and to figure out who we are. While I was going through school, I wasn't super overweight or anything but I had some extra weight on me. I made a lot of jokes about it to the take pressure off others joking about it. When I think about it now, I was bullied about my weight but I was probably my own biggest bully. It was my own expectations for myself that ended up being destructive.

I believe a lot of eating disorders develop because of media and school pressures. TV and the Internet make you think you need to look a certain way, and that if you don’t you're going to be judged. It can create a horrible state of mind.

Looking back on your childhood and high school years, what might have prevented your eating disorder? Were there specific things that others — not just your parents, but your teachers and counsellors and friends — might have done that would have been helpful? If I had been able to express my feelings or seek help without feeling like my peers were judging me for something that wasn't my fault, my eating disorder might not have developed. I got scared and held it in. You never know if it was just something that was in the cards – something that I had to overcome in my life to grow into the person I am today.

You say that your experience at the Looking Glass Residence (formerly the Woodstone Residence) was the biggest reason you were able to get past certain points in your life and truly recover. What was it about that experience that made it so cathartic or helpful? It took me away from the life that I was living. I was able to get the time, the mental space, and the support I needed to confront my eating disorder and start my recovery journey. At an outpatient facility you have a few hours, or a day or two, where you’re great but then you're back at home with your old triggers and you're back to square one. At the Residence you’re away from it all. You have the opportunity to work through your triggers and figure them out. By not running and hiding, you take everything head-on and figure out how to get past it.

What do you think was different for you — as one of the few men treated at the residence? Or was it the same experience as it was for the girls? I was the first guy ever to go, so everything was new for me and for them. There were little things — like my bedspread having a really girly floral design — but other than changing a few things to make it more gender neutral, the treatment was the same. We suffered from the same mental health issues. They may have developed in different ways but somewhere down the line a common denominator triggered the issue.

The only difference about being a male and having an eating disorder is that people think "what's wrong with you? How could you have an eating disorder — it’s not a guy thing". I believe the main reason for that is how much the media influences how females are supposed to look and act. Even though the spotlight is on women, there are thousands of men struggling with eating disorders.

When you look back on all that you have been through, what would you say your most important discoveries have been — about yourself, EDs, and recovery? The most important discovery was that it wasn’t my fault. A lot of the traumatic stuff that happened to me in my life and the feelings I developed were because of someone else. I let it take control over me and believed that it was my fault. In recovery, I learned how to let things go. I realized that someone else’s choices are not a reflection of me. I don't have to let their choices control me.

Thinking of other boys and young men who may have similar experiences to yours or who may for other reasons develop an ED, what would you say to them? I would say you are not the only one. You don’t need to be ashamed. Don’t feel like because you’re male that you can’t come forward about having an eating disorder. Don’t be afraid to be vulnerable — like you have to conform to the stereotype of the strong silent male figure who can’t show emotions or look weak. The only way to become stronger is to work on your weaknesses. When I reached out and found the help I needed, I became a better person and got past my eating disorder. There are ways to get through it and move forward.

What would you say to the other people in those boys' and men's lives?Be there to support them. Don’t expect them to get better overnight, because it’s a work in progress everyday. There are many things that trigger eating disorders, and there’s a lot of pressure that goes with trying to recover from an eating disorder. We all need to eat to survive so the pressure is 24/7. Take a step back. Don’t push. Encourage them everyday to open up. Let them know you’re there to support them every step of the way. Don’t give up on them.

If the Looking Glass Foundation could make one lasting difference in the lives of youth at risk for EDs - and particularly for boys and men at risk — what would you like it to be?My wish is not just for men and boys, but for everyone. I would love to see the Looking Glass Foundation open a facility that helps everyone – especially those over the age of 24. Currently the Looking Glass Residence treats people between the ages of 17 and 24. Luckily, I was 24 so I just made it in. Opening something for people 24+ would change so many lives. It’s a shame that people can’t access treatment because of their age. So many more lives could be saved if there was no age restriction.

Tyson is an eating disorder survivor, alumni of the Looking Glass Residence (formerly the Woodstone Residence) and an inspiration to those around him.