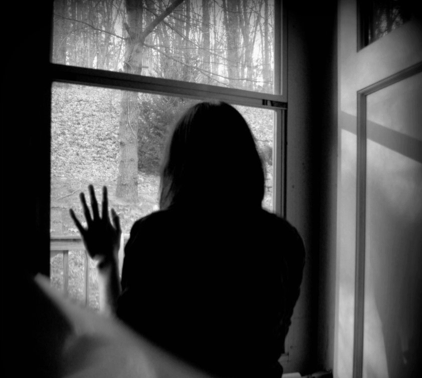 We recently received a very powerful testimony from a sibling of a young woman with an eating disorder who is a part of the Looking Glass Foundation's community. It is a plea for us to learn more about eating disorders - to arm ourselves with knowledge to better support and help those around us that are suffering.

I try to look back and remember what it was like before... but all my memories are singled out as specific occasions. There is nothing to fill in between the times that I do remember - it is just black, open space. I can’t see the four of us sitting around the table any more like we did every night for the 14 years of my life. Now, if we can pull ourselves together for a meal, we are always joined by another guest – the great pink elephant that constantly is stepping on our feet beneath the table. I can’t find a sense of normality in this family anymore. Any familiarity I recall from the earlier days has long gone disappeared, either forcefully or it has slipped away under our noses – more often the latter.

I look for escape. It is my way of coping – escaping away to another time or place, taking my mind away from the present, pretending things aren’t the way they are. My brain has been trained to flee. I am an escape artist in my own right. If anyone could see the places I have gone when my mind reacts to the stress and pain I constantly feel, they wouldn’t understand how I can make this life disappear so entirely. But the truth remains that I am never really anywhere but in my own head, still where I began, just in avoidance to what stands strangely in front of me. Nothing is real.

There are times that I feel things have gone back to almost what they were, but never has it felt truly like those days, and never has it felt as bad as the days that followed. This reality is a fact; bulleted, indented, bold. It has changed so many things that if I could go back and make it right, I would have no sense of what my life might turn out like. Or maybe it hasn’t changed me at all, and I am the way I am from my own doing. One will never know.

It was late spring. As I mentioned earlier, my memories stand as individual situations - they leave me with no foundation. I was sitting on the left hand side of the floral patterned couch in our basement. I have no recollection of what I was watching on TV, but either way it would not have mattered because my attention was elsewhere. I was in earshot of a conversation occurring upstairs between my parents, I believe. They were speaking of my sister in dire tones. Their words were not in anger or frustration but in complete worry. I was unaware of the reason of this conversation; all I knew was that my sister was in some sort of predicament, a bad one. At a moment, I heard someone’s feet coming down the stairs and into the room I was in. It was my mom. I can’t recall how the conversation went, but she told me that they were very worried about my sister and that she was in trouble. I, without a moment of doubt, gasped in a breath of air and shuddered with tears. I asked what was wrong, thinking of the worst possible things. And my mom said she wasn’t eating.

That day my parents took her to the doctor. My sister was diagnosed with anorexia.

Maybe one or two months later, I was in the kitchen with my mom. We were talking about our family Europe trip coming up in a few weeks. I could sense that she was stressed, so I asked why. My mom told me she didn’t even want to go anymore. We had been planning this for almost a year. I was disappointed in her, like she had let us down. How could she now put this trip on us like a burden? Like a chore? But her head was not in the space that mine was; she was thinking of other things, things I couldn’t even comprehend at the time.

The summer went by so quickly, I don’t know when exactly things got bad. It was hard to see differences in her from week to week when I would see her every day, but it was evident things were changing quickly. My parents made her take a hiatus from soccer; they thought she was too weak to play. One time my grandparents were in town and they wanted to take us out for dinner. We all went, except for my sister who said she didn’t want to go. She did not want to eat, or not eat, in front of them. No one said anything about it at dinner. Sometime later, I was in her room looking for something, I don’t know what, probably a book. I found a journal, and being the little sister it was my duty to read it. What I found will never leave me. It was her diary from the spring to present, detailing every thought and event around her eating disorder. I got to the part around October and it spoke of a night where she stayed home and ate nuts while her grandparents took the family out for dinner. She said she wished she had gone and had a proper meal.

I think I read this journal three times. I knew it was a total breach of her privacy, so I never said anything to anyone. I had had no idea how much she was suffering, how her warped mind was controlling every move she made. I had no idea. I wanted to show my parents, to let them know how these tragic months were for her, so they could get a sense of her pain. But I never did. I did not want to betray my sister and take what outlet of emotion she had and ruin another aspect of her life for her. So I kept the stories to myself. Without this journal I would never have the insight I had – my parents were destined to shelter me from the whole experience. It is in writing where we can see the most raw and real emotions of the writer, like nothing we will ever hear from their mouths, it is their heart and soul.

My sister was being eaten alive by her own body. She could not think, she could not run, at times she could not feel her heart beat. That Christmas, my dog got sick. For no apparent reason she was sick. The veterinarian could not find a source to her illness, but she said dogs could become sick due to stress. Our family was so on edge, the dog couldn’t pass a bowel movement.

She had these green yoga pants, probably the smallest size the store carried. She always wanted to show us new yoga moves she had learned in her class. On several occasions we would be in the kitchen and she would get down on the carpet and attempt these positions. My parents were instructed not to let her stand on her head, because it might cause her to pass out, but any other move she did would cause her bones to jut out in places you didn’t even know the human body had bones. Later, once the pants became too small, I believe my mother threw them out. Those pants were the worst of times. They were the only things that would fit snug to her skeleton, and they carried a view of the human body you only see in National Geographic magazines.

In January, it came to a head. Things were becoming worse by the day, until my parents forced her into hospitalization. She reluctantly agreed to stay for a while to get her weight back up so her heart was not in danger of stopping. At night while she slept, her heart would slow down so much that the nurses would have to come wake her before it took its last beat. Many of these things I did not learn until after the fact, in some cases, years later. At the time, I was in a faraway place. I did not spend so much time at home and would avoid any opportunity to go to the hospital for a visit. It was not a place for me. I did not want to see the truth of how bad things really were. I did go to the hospital once, though, early on in her stay, and looked around the floor. I noticed the smell, too sterile, too many chemicals, and too much sickness. I saw her misery in life.

And now, exactly eight years later, I am revisiting these days. My sister’s disease did not get better after that hospital stay, but worse. New issues surfaced. She attempted university but could not stay healthy. She moved out of the house and my life gained some more normalcies. But no matter where she was; living on campus, living off campus, in treatment, or somewhere else, she was always next to me and on my mind. She caused my heart to flip and my nerves to clench at any given moment.

But today I get to see her true self. When her presence used to cause me extreme stress and heartache, I now enjoy the time I am with her. She is the sister I grew up with, 100% herself, without that great pink elephant taking over her person. Neither of us can guarantee she will always stay this way. Like any mental disorder, her eating disorder will never truly leave her, but she has been able to shut it down and put it in her past. No matter how impossible it seemed in January 2006, no matter how dire the situation was, no matter how positive I was that she was not going to make it to age 25, I never lost hope that I would get to meet my sister again one day.

Like her disease, the discussion around eating disorders has no conclusion. It is up to us to stop whispering about the issue and start raising awareness to a disease that only gets worse when people stop talking. We need to raise awareness for eating disorders across Canada, so please take some time to educate yourself and talk about it with your friends and family because one day you too may be affected, through someone you know, by this insidious disease.