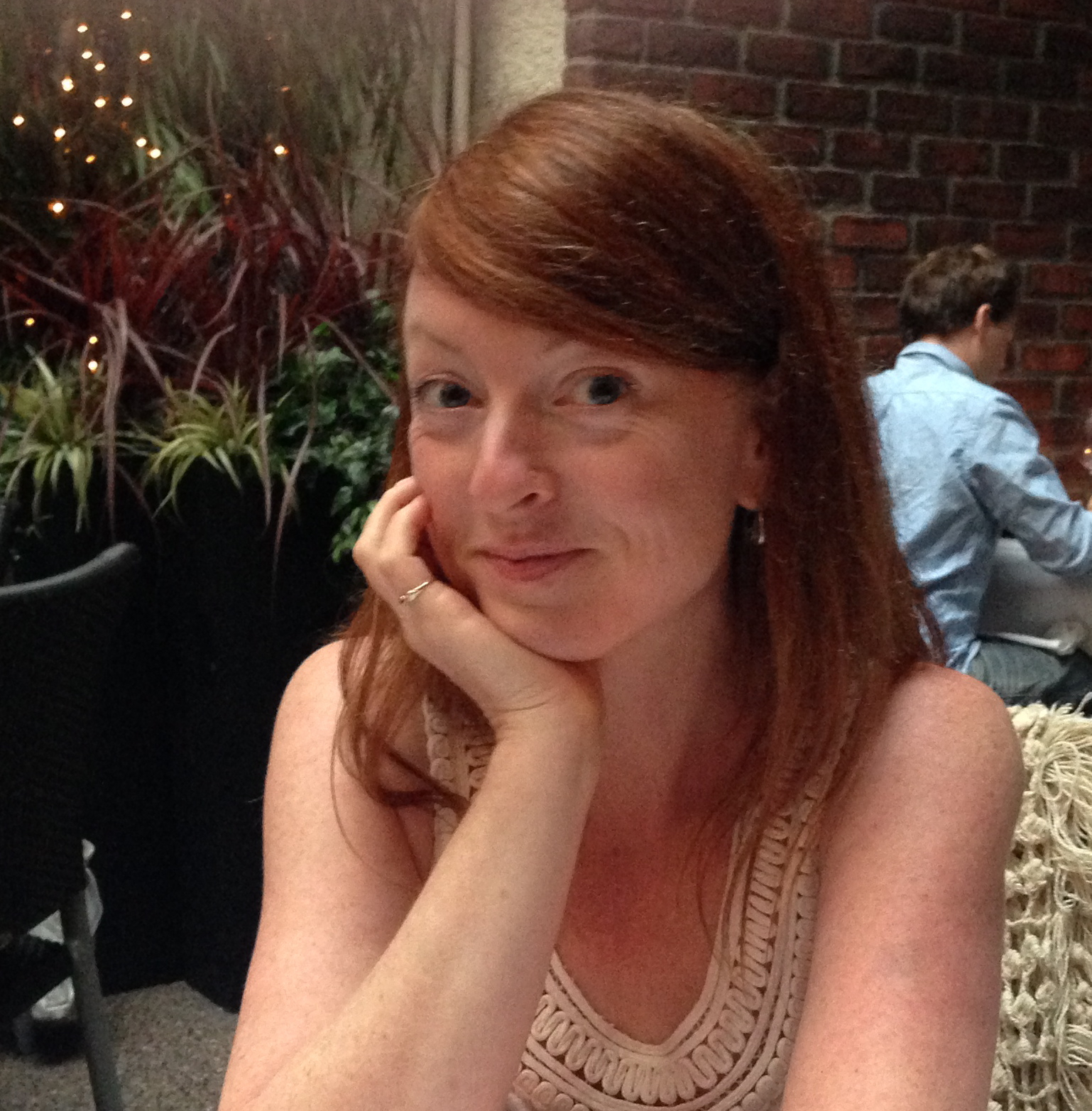 My First Time at Camp: Discovering Meaning Through Discomfort 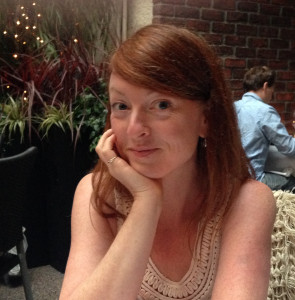 I never had the chance to go to camp as a kid and even if I'd had the chance, I don't think I would have wanted to go. I've always been a bit of a loner and the idea of doing things in groups… well, I get a little uncomfortable just thinking about it.

Somehow, I thought that attending camp as a cabin leader would be different, though; easy. It didn't occur to me that I might experience discomfort as an adult for the same reasons I didn't really want to go to camp as a kid: because sharing small spaces with new people and doing unfamiliar activities with a group of strangers can be challenging.

But what I learned at camp was that taking on this challenge was worthwhile.

I knew we were going to do a number of outdoor activities that I'd never tried; activities like rock climbing (on a climbing wall) and high and low ropes courses (click here to see what these look like). As an academic/artsy type, I was a little intimidated by this idea but since I'm a fairly confident person, I figured I could manage it. Furthermore, I had a secret hope that I might be able to get out of the more physically challenging activities.

What actually happened when we did the low ropes course on day two surprised me, though. I found myself inspired by those who courageously went first and was excited to try it myself and see what I could do.

The low rope was set up between two posts, like a tightrope just a few feet above the ground. The idea was to walk across the rope while using a second rope at chest-level to help with balance. The other campers were lined up on either side, not interfering but ready to catch you if you fell. Our activity leader, Laura, told us we could ask the group for anything we needed when it was our turn. So I asked the group to call out encouragement as though I were an infant taking my first steps; because that is how I felt: like a small child, both excited and afraid of what I was about to try for the first time.

The experience was fascinating. I felt my body responding to the challenge automatically; it knew what to do even if I didn't know, consciously, how to direct it. Constant verbal encouragement was called out from smiling faces on both sides; all of them with their hands held up, ready to catch me if I fell. The effect was exhilarating.

However, the feelings of success and achievement I got from my experience with the low ropes left me unprepared for what I'd feel on day three. After arriving with my group at the high ropes course and looking over the apparatus, concern and worry started to bubble up into my awareness. When asked which one I'd like to try, I looked around at the various activities and wondered which one might be the easiest. I said I'd let others go first. Some seemed unafraid; they'd done things like this before. Others were like me, inexperienced and afraid but trying anyway. I watched, in awe of them all for their courage as they tackled these physically challenging activities.

Finally, I was asked directly if I wanted to climb the rope wall. I had watched another camper who'd never done it before and she'd made it successfully to the top. It was encouraging to watch but I was still doubtful of my ability to do the same. When I paused and listened inwardly, I noticed there was a story there; a voice. The voice said, "I'm not strong enough. It's too hard and I'm going to fall. It's going to hurt and I may not recover,". I realized in that moment that I didn't trust my body; I didn't trust that it could support me in the way I needed it to. And then an interesting thing happened: once I was able to see and identify that story in my mind, I recognized that I had a choice. I could believe the story and avoid the challenge or I could challenge the story and take a chance on believing that my body could support me. I chose the latter.

The climb was difficult. And scary. "Don't look down," yelled one camper and it was wise advice, I discovered, after looking down. But I made it to the top. I was exhausted but I didn't fall. I didn't hurt myself. And once again, campers calling out encouragement was one of the essential factors in my success. If they believed I could do it, it was easier for me to believe I could too. 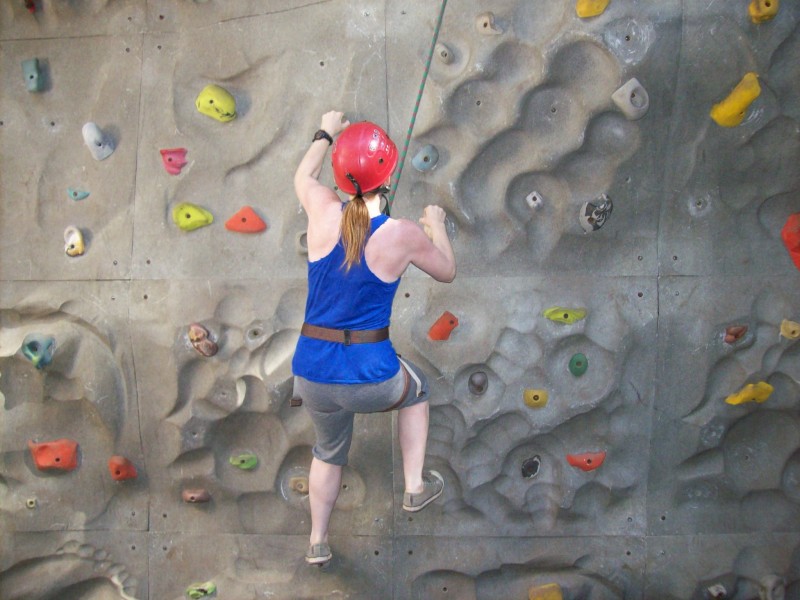 You might think at this point that I was successful at every outdoor activity I tried but I wasn't; at least not in the way we often think of success. On day four we tried the rock climbing wall. There was an easier side and a more difficult side. Fuelled by my recent experiences, I volunteered to be the first to try the difficult side. About halfway up I had to stop. I couldn't find a handhold and my arms were exhausted from climbing the rope wall the day before. I rested for a minute or so but when I gave it another try my arms quickly tired again. I still couldn't manage to find a handhold sufficient to get any further up the wall. I realized that was where my climb was ending and asked to be lowered down.

The most interesting thing about my experience on the rock wall is that I didn't feel a single ounce of defeat or failure. I also didn't feel judged by anyone around me. I was proud of myself for trying something new and scary. I acknowledged my physical limitations and could see that, considering I was tired from climbing the rope wall the day before, I'd done my best. And that was enough.

Here's what I learned:

1. Being in group settings has its challenges but it also provides unique opportunities that help me learn and grow in ways I cannot if I always stay in my party of one

2. I am capable of doing more than I think I can; especially when I ask for and accept encouragement from others

3. Success can be measured in various ways: although I may not reach an external goal post, I feel hugely successful when I learn about myself through the process of attempting to reach a goal; I accept my real limitations and let it be enough that I found the courage to try

Thank you, Looking Glass Camp and campers for inspiring me with your courage.

Angela is a Yoga teacher, Ayurvedic health educator, student of psychology, writer, singer, musician and performer. Her aim in life has always been the same: to try to understand her mind and heart. Angela shares her discoveries with others in hopes of supporting them in their own efforts to figure out how to live a meaningful and fulfilling life.